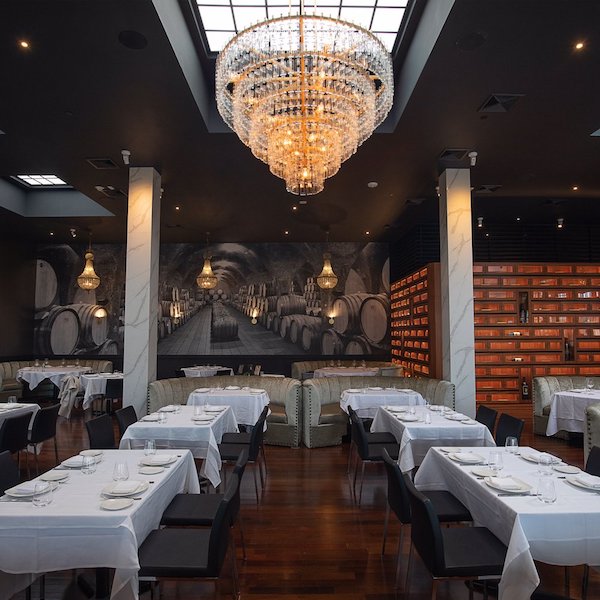 The luxurious Roslyn spot where Barto had been is a place of golden chandeliers, a massive lighted cubicle wall of wine, shelves of wines and liquors, candles, high ceilings and a huge glass front.

Its chef is Erminio Cante from Puglia, Italy, who has bounced around New York City restaurants for the last two decades. He, along with owner Chrstos Spyropoulos, sees his mission as bringing the new Manhattan flavor to Long Island. That theme was also emphasized in an interview with Mr. Conte, who described Prime 1024 with an upscale look one might find on Park or Lexington Avenue.

Unmentioned are the transfer of Manhattan prices as well. A steak dinner can cost as much as $110 and no less than $41. Pastas and risottos top out at $38 and start at $24. No doubt many upscale diners will feel the freshly made pastas and prime meats justify these tabs.

The only starter recently sampled was a husky, meaty slab of Atwood bacon followed by a petite filet mignon. But the lobster ravioli was stuffed with a could-be-anything filling without a hint of lobster flavor which is the case at almost every Long Island restaurant. Considerably better were two exemplary house made pastas: one featuring tender octopus, the other baby back ribs.

Both the food and décor are a few steps ahead of the service at Prime 1024. Although there were no major gaffs, there were many minor ones that simply should not occur at a luxurious, pricy spot. The diner who ordered the filet mignon was served a sirloin instead (it had to be replaced), the other three diners all were served dishes that were ordered by other people at the table and busboys cleared the table while some were still eating.

The super chocolate lava cake with warm molten chocolate was a unanimous choice over the strange cake-like tiramisu.