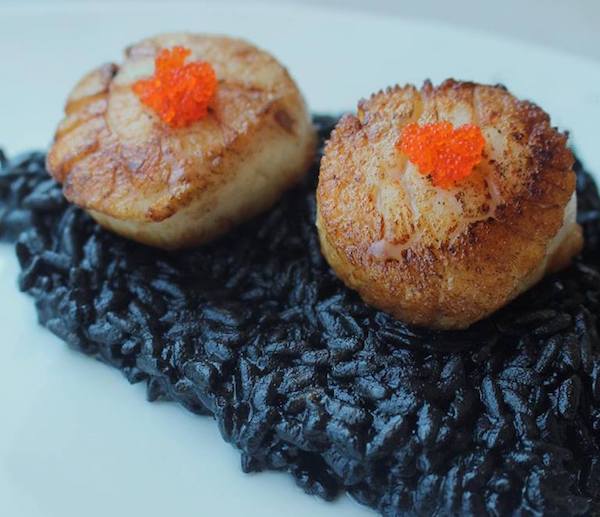 It’s new, it’s pretty, it’s loud and in English, it’s called Dream. Oniro opened in Woodbury this spring where many restaurants including Major’s Steak House had previously held forth.

Visually, Oniro is a light bright spot; oversized wicker chandeliers dot the main dining room with its open kitchen, candle lit tables, large urns, fish on ice display, vegetable rack and candle lighted large lanterns. The handsome Oniro is owned by a number of the principle partners of Limani, the upscale, well regarded Greek extravaganza in Roslyn. It’s described as a lower priced version of Limani: well maybe, but it's still anything but an easy-on-your wallet establishment. Whole fish cost between $29 and $32. The three land selections (chicken, lamb chops and steak) go for $25, $42 and $44, while three gigantic tiger shrimp in one dish fetch $15 each.

The extensive Mediterranean-Greek menu here is preceded by some welcome pita and humus. We then opted for a skordalia featuring a bland potato and two mezes garides loukoumades or a generous portion of crisp, good tempura shrimp accompanied by spicy sambal aloli and a plump jumbo blue crab meat crab cake.

Pay attention to salads at Oniro, they are anything but an after thought here, but a center of the table creation. The towering ellinki is a tomato dominated colossus of beef steak tomatoes, cucumbers, shaved red onions, green peppers, Kalamata olives and aged feta that could feed four. The beet salad or beets buried under baby arugula with a smattering of smoked goat cheese mousse is also a winner.

Two main courses sampled were a filling nisiotiki and a less than filling scallops risotto. The first is a mix of mussels, two tiger shrimp and a scallop on a substantial bed of linguine while the second consisted of only three scallops atop some risotto drenched in black truffle squid ink.

Congenial waiters are reasonably well informed but they or bus boys should provide clean silverware for each course and should never clear tables when some diners are still eating.

We went to Oniro on a usually slow Wednesday night and it was packed. The noise level at this all hard surfaced room was ear splitting. I can only imagine what it must be on a Saturday night. Diners had to yell at tablemates to be heard. It’s a room that cries for some soft, noise dampening material.