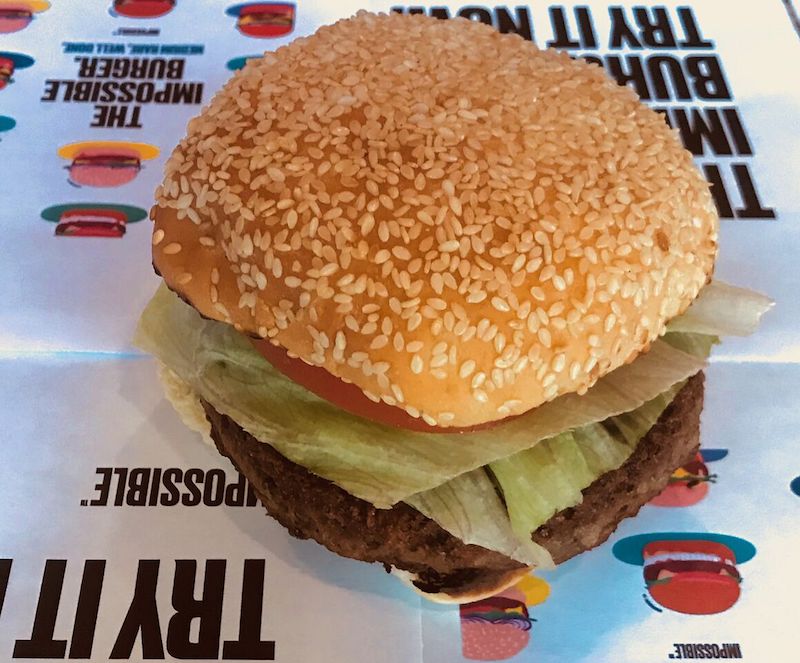 Scratching your head yet? It’s the Impossible Burger, the imitation sensation that’s been sweeping the nation with its near-indistinguishability from real beef. Sustainable, healthy, and (most importantly) tasty, this is the first vegan burger that’s hard to have beef with. Curious to see how it tastes? We’ve got good news: the Impossible Burger has finally made its way to the East End at iconic restaurant Rowdy Hall! So if you want to sate your curiosity/hunger, head to Rowdy Hall and give this meatless marvel a try.

Launched in 2016, the burger is the brainchild of Impossible Foods, a Silicon Valley team devoted to “making the impossible possible”. The Impossible Burger is crafted from simple, natural ingredients such as wheat protein, coconut oil, and potato protein, but it’s Heme that gives it the characteristic taste and aroma of real meat. Heme is a compound present in all organisms; especially animal muscle, and Impossible Foods has discovered how to extract this compound from plants, produce it using fermentation (much like the centuries-old method used to make Belgian beer), and incorporate it into their beefless burger.

This burger isn’t just good news for vegans, though. The Impossible Burger is also free of cholesterol and other contaminants associated with beef production, making it a much healthier (and guilt-free) alternative for everyone. Additionally, it’s 100% free of hormones, antibiotics and artificial ingredients. It’s Mother Earth approved, too: The Impossible Burger requires 95% less land, 74% less water and creates 87% less greenhouse gas emissions than regular burgers.

If you’re finding all of this hard to believe, you’re not alone. Mark Smith, owner of the Rowdy Hall, also had his doubts. “When I heard about the Impossible Burger about a year ago, I was skeptical about its claims,” he explains. “I was never a fan of food that was made to taste like the food it was attempting to imitate. While at a restaurant in Manhattan, which was the only restaurant in Manhattan serving the Impossible Burger, my friend who is a vegetarian ordered it. Needless to say, I was blown away by the product in so far that it looked and tasted like a burger. This is truly an amazing product that is good for the environment and good for those that can't or won't eat meat for either moral or medical reasons. Come to Rowdy Hall and try the Impossible Burger and see for yourself.”

The Impossible Burger is served in the same fashion as the signature Rowdy Burger with French fries and your choice of cheese, lettuce, tomato, and onion for $19. Do yourself, your planet, and your doctor a favor and try out the Impossible Burger. For once, eating healthy won’t be a big missed-steak… or in this case, burger.